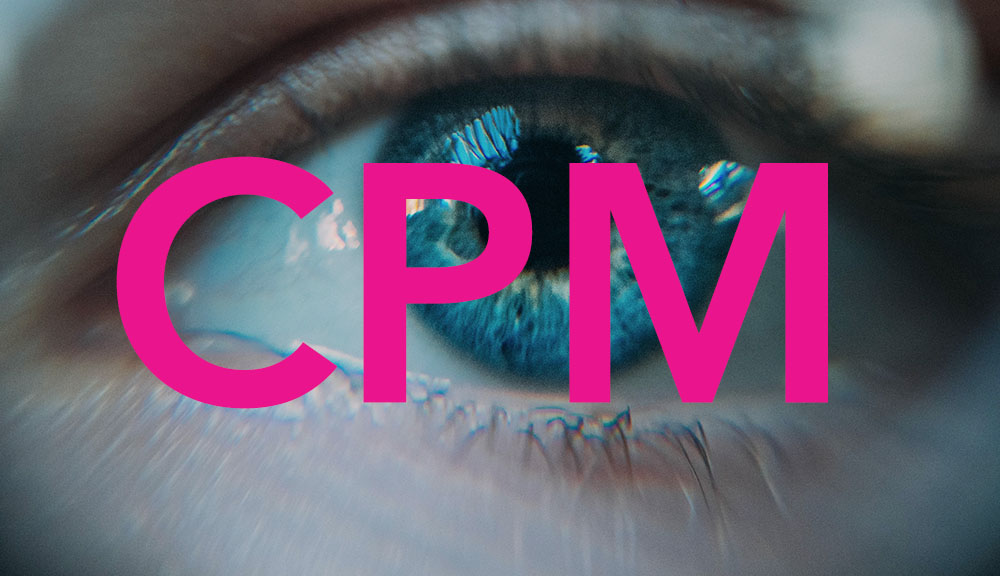 What do I need to know about ‘CPM’?

What Does CPM Mean? Read on to find out what CPM stands for. In online marketing, there are a number of options when it comes to choosing how you are going to pay for advertisements. One of the most popular is ‘cost per thousand’, also known as ‘cost per mille (CPM)’. This refers to the payment required for every 1000 impressions that a webpage advertisement attracts.

To calculate a CPM, you will need to take a campaign’s advertising costs (x) and divide it by the number of impressions (y) generated at each of the campaign’s stages. In other words, dividing x by y will demonstrate the success of a campaign, relative to how much it cost.

If you have spent a certain amount of time working in marketing, you will know about the tendency to measure the success of advertisements based on click-through rate (CTR). After all, a customer who actually clicks on an ad is more likely to obey a call-to-action (CTA). In this case, you may choose to pay based on cost per click (CPC).

Another option is to use a cost-per-acquisition (CPA) model. In this case, only when a web-user actually clicks on an ad and makes a purchase will the advertiser need to make a payment to the website.

However, an ad does not necessarily need to be clicked in order to make an impression on customers. As a result, it is also important to keep an eye on an advertisement’s impressions; it could be that it has raised a great deal of awareness. This, in turn, could lead to further success down the line.

Because of this, marketers will usually opt for CPM models when the goal is mass awareness. For example, a campaign aimed at changing people’s behavior (such as making them vote a certain way or take up habits like recycling) would be best judged based on how many people it made impressions with. In these cases, it would be possible to benefit from an ad even if it did not result in a sale.

On the other hand, if the purpose of an advertisement was to boost awareness with certain niche groups, and thus increase the likelihood of sales, it would make more sense to judge its success based on CPC or CPA.

While CPM may sound like a good idea for certain marketing campaigns, it is important to remember just how large the internet can be. For a CPM campaign to work, a website needs to enjoy high levels of traffic. As a result, you may find yourself paying higher rates for your campaign to be as successful as possible.

It is also crucial to keep in mind that CPM does not have to be limited to a specific type of media. Often, advertisers will measure impressions across different forms of media, as well as various locations and at different times. This can be invaluable during the planning stage of a campaign, as it will help to demonstrate which options have the most sales potential.

Want to know how we can help with your digital marketing or keep reading more about other best-known marketing acronyms.